The key characteristic of the wrap dress is that a closure is formed by wrapping one side of the dress fabric across the other and tying it into a knot or bow either to one side of the waist or around the back of the dress. This style of wrapping creates a v shaped neck and a well-defined shape. There are also wrap dresses that feature these characteristics but have a faux wrap instead of a natural one.

The wrap dress was designed by American fashion designer Diane von Furstenberg in 1972 following her divorce. It was designed for professional women to wear to work and was a symbol of the women’s liberation movement of the 1970s. Wrap dresses experienced renewed popularity in the late 1990s and are still fashionable today.

Amongst the wide range of celebrities who have been spotted wearing this style of dress are actress Gwyneth Paltrow who wore a bright orange number at a London dinner, Kim Kardashien who wore a wrap dress to a charity event and Christina Ricci who wore hers to the British Academy Film Awards. Other stars include actress and producer America Ferrera, Superman and Desperate Housewives star Teri Hatcher and actress Helen Mirren. 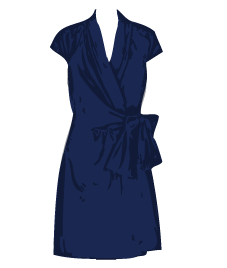