The key characteristic of the bodycon dress is that it is tight fitting, following and emphasising the contours of the body. It is usually made of a manmade fabric such as Lycra or Spandex which clings to the body. The word ‘bodycon’ actually stands for ‘body conscious’ and relates to tight fitting style of the dress.

The bodycon dress was at the peak of fashion during the 1990s, when it was worn on shows such as Saved by the Bell by leading lady Kelly Kapowski, but the origins of this style of dress are believed to date back as far as the 1960s. During this era ‘mini mod’ dresses were in fashion which featured a similar shape to the bodycon but these dresses were made in different materials as spandex and the like hadn’t yet been invented. It was Herve Peugnet who in the 1990s produced the first bodycon dress out of newer materials. They were referred to as the ‘bandage dress’ which moulded and shaped themselves to the wearer’s body. 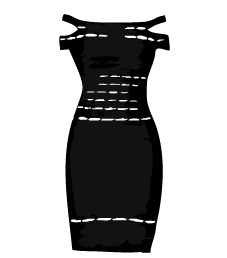