The trench dress is a blend of fashion concepts. It features elements from the shirt dress which includes men’s shirt styling such as collars and a button through front with elements seen in trench coats such as thick fabrics and further button through detailing. Trench dresses are typically longer in length than shirt dresses, with a subtle trench coat design. They also usually include a belt, normally self-fabric to complete the look.

The trench coast first came into existence during the first world war when it was worn as outer wear by both the English and French soldiers as a way of keeping the vast majority of the rain off. This characteristic is one of the reasons that the trench dress was designed by fashion house Burberry, which was released in 2010. It takes the look of a typical trench coat and creates a more feminine look.

The trench dress is not your typical fashion item for the rich and famous but that hasn’t stopped them wearing it. Catherine Duchess of Cambridge, aka Kate Middleton owns a navy blue trench style dress with gold button detail which she teamed with a hat. Singer Kylie Minogue has been snapped wearing a sleeveless navy trench dress whilst actress Renee Zellweger chose a red number. Even Victoria Beckham has been seen a trench style of dress although hers featured a variation on the style, complete with cape. 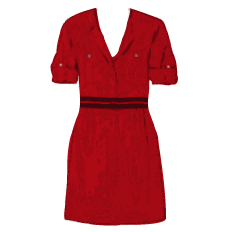