The kimono dress is the traditional style of Japanese dress which was historically worn by men, women and children and dates back to the 5th century. Today it is worn by just women and usually for special occasions in Japan. The word ‘kimono’ can literally be translated as ‘thing to wear’ and refers to the full length robe, although in today’s fashion conscious world, shorter styles are also available.

The kimono dress is characterised as being straight lined with a hem that traditionally falls to the ankle. They usually feature collars and long, wide sleeves whilst instead of fastenings, they wrap around the body from left to right and are held in place by a sash known as an obi. Having been heavily influenced by Chinese styles over the years, Kimonos can commonly be seen in fine silks and featuring iconic Chinese patterns. 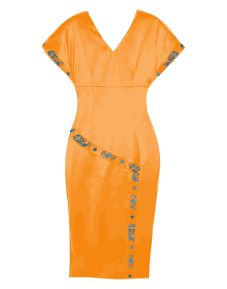