The corset is a historical item of clothing which was originally designed to hold the torso in place and shape it, usually for a long-term effect, using boning. Corsets and torsolettes, which are short corsets covering the chest and waist, were popular during Victorian times. By the late 19th century, many doctors were aware of the negative implications of corsets on the health of the wearer and by the Edwardian period they had altered in shape to be more flat fronted. By the end of the Edwardian era, the shape and general design of the corset had changed again to feature narrower hips.

The 1960s saw one of the biggest changes to the way that the corset was worn. Thanks to the advent of fetish fashion, corsets began to be worn as an outer garment and skirts were often attached. This heralded the version, today referred to as the corset dress. Today’s corset dresses are broadly inspired by the Victorian and Edwardian corset designs but don’t feature the same structuring.

Vivienne Westward’s Spring 2012 collection saw corset dresses back on the catwalk whilst celebrity Paris Hilton and actress, Sarah Hyland have been seen wearing their corset dresses to award ceremonies. 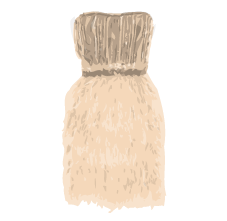