The fitted dress is characterised as being tight fitting and perfectly shaped to fit the female figure. The dress style traditionally features fitted sleeves which are close to the shoulders and upper arms whilst a tightfitting torso is completed by a skirt which flares out from the hips. Variations on this style of dress include both long and shorter versions with differing types of fastenings ranging from small dome buttons through to lacing for a snug fit, depending on the era.

The fitted dress first appears in fashion history in the mid 1300s when it was worn as an everyday dress. Throughout the next hundred years, it appears in various pieces of artwork worn by nobility, royalty and right down to the middle classes of society.

Today, the fitted dress has a slightly more flexible style, depending on the designer with sleeveless and shorter length versions available. Former Spice Girl and WAG Victoria Beckham is a regular fitted dress wearer, opting for below the knee versions and bold colours such as red and orange whilst actress Demi Moore also has a number of fitted dresses in her designer wardrobe. 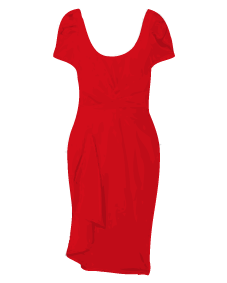