The drop waist dress, also known as the flapper dress, is characterised by its low waistband which usually falls more in line with the hips than at the natural level of the waist. This style of dress gives the illusion of lengthening the body and tends to have a width at the hips.

The drop waist dress was quite common during the 1920s with dresses in this style usually ending just below the knee by 1925. However by the late 1930s there was a trend back towards more formal dress styles and the drop waist was no longer favoured in the world of fashion. The style then went into fashion obscurity until 2012 when the 1920s fashion revival bought this style of dress, along with a few other choice styles from the 20s back to the forefront of fashion. 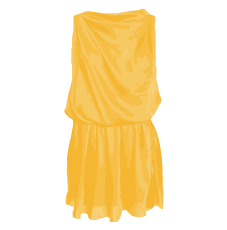