The mini dress is characterised by a short skirt which falls around the mid-thigh. The bodice of the mini dress can alter depending on the fashions of the era and can be sleeveless, feature cap sleeves or even long sleeves. However the length of the skirt never changes.

The mini dress first came to the forefront of fashion in June 1965 when UK designer Mary Quant invented it. Fed up with the British fashion of the day and women being seen as ‘unsexy’, Mary Quant designed this style of dress as a protest to what she referred to as ‘horrific’ fashion of the 1950s and 60s. The trend grew rapidly thanks to the first super model, Twiggy showcasing this new look.

By the late 1960s the mini dress trend had been replaced by the maxi dress trend and it wasn’t until the late 1970s that the style was revived. At this time, the mini style was part of the ‘sex’ look and often teamed with fishnet stockings. By the 1980s and 1990s, the mini dress had become part of the power dressing movement with this style being worn under fitted jackets which were heavily shoulder padded. The mini skirt was then banished to teenage wardrobes until around 2005 when stars such as Carrie Bradshaw in Sex and the City and other sitcoms bought this style of dress back to the forefront of fashion.

Today, a number of celebs have been spotted sporting the mini dress including super model Gisele and actresses Emma Watson and Blake Lively. 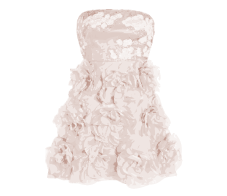