Animals killed in the name of fashion- Fashion’s Dirty Secret 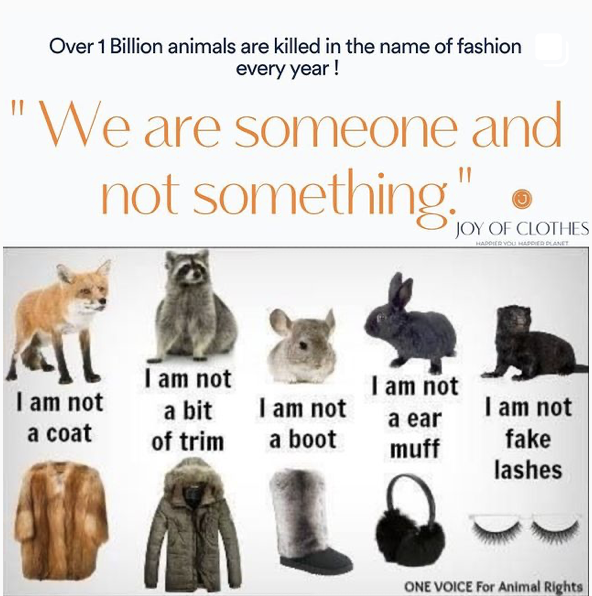 Every year, billions of animals suffer and die for clothing and accessories. Skin is torn from them to make leather, birds are held down while handfuls of feathers are ripped out of their sensitive skin, and small animals are caged for life before being killed for their fur. Sheep are often beaten and mutilated by workers stealing their wool and their skin for shearling. Goats are similarly abused for cashmere and mohair. All this is done in the name of fashion. No matter the type of material or where it comes from, if the process involves an animal, it involves horrific cruelty.
Humans have used leather, wool and fur for years and billions of animals are brutally slaughtered each year for the clothing industry. Mass production of fur and leather items has created a cruel system of farming, trapping, and skinning and has sparked uproar among animal rights activists.
In addition to causing the suffering and deaths of millions of animals each year, the production of wool, fur, and leather contributes to climate change, land devastation, pollution, and water contamination.
The vast majority of the billions of animals who are killed for their skin, wool, feathers, or fur endure all the horrors of factory farming.
🔴Sensitive living beings are forced to live in cramped, filthy conditions, and every bit of freedom and autonomy is taken away from them. Animals suffer at the hands of workers, who may roughly handle, kick, and beat them.
🔴After a lifetime of torment, they’re violently slaughtered via the cheapest means possible, including bludgeoning, anal electrocution, and gassing. Some are even dismembered and skinned alive.
🔴Trapped animals used for their fur can suffer for days from blood loss, shock, dehydration, frostbite, and gangrene or be attacked by predators before trappers return to kill them.
👉So, let me share some terrible, brutal and very difficult facts with you, which you need to know to understand at what costs our fashion comes.
“Animals are not ours to wear or carry our possessions in.”
PETA
‼️We the consumer need to know and understand the incredible amount of suffering and devastation represented in each piece of fur.
This cruelty and the fur trade in general will end only when consumers refuse to buy or wear animal fur of any kind.
▪So, let’s start to shed some more light on how animals are killed in the name of fashion. 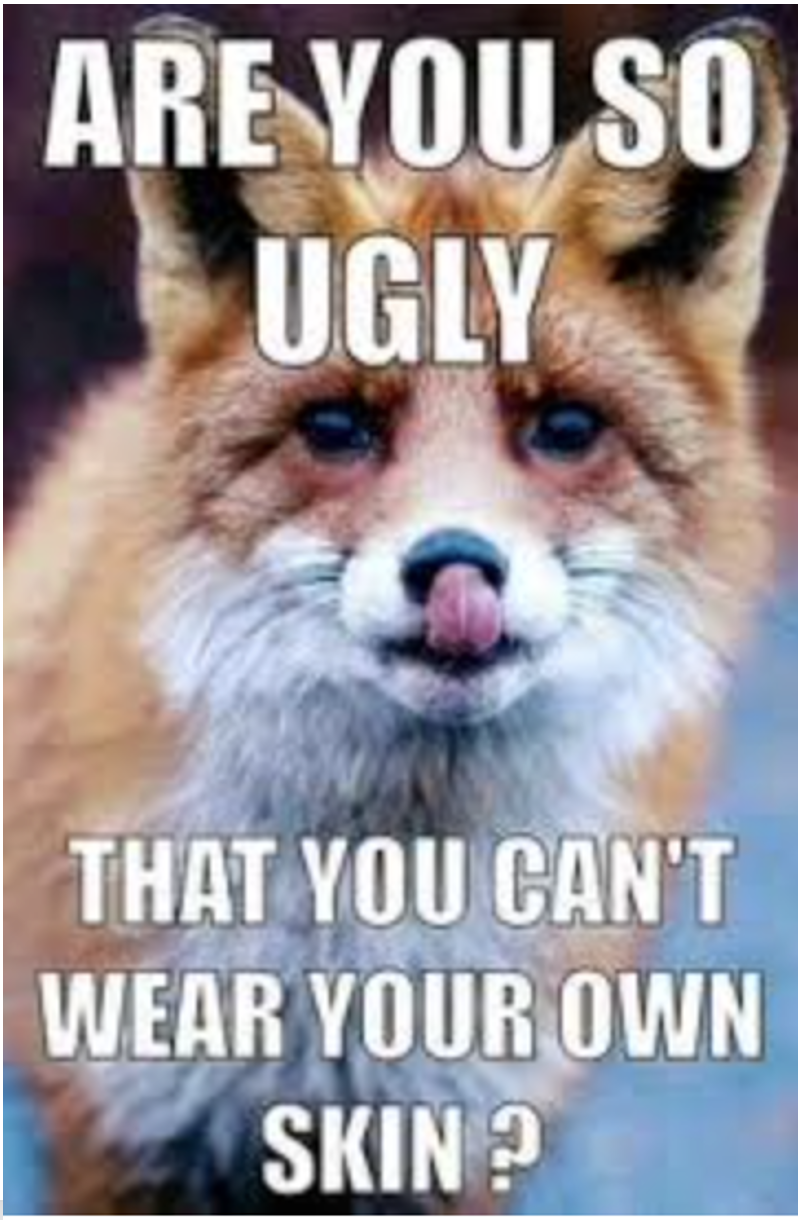 ‼️Each year over 100 million animals, including millions of dogs and cats, are killed for their fur on fur farms around the globe.

Most of the the fur trade’s skins originate from animals who are confined and killed on fur farms. Millions more animals are victims of trapping; caught in the wild using spring traps with metal teeth that smash bone and tear muscle.
🔴Animals are killed for the fur trade in extremely horrific ways. Bludgeoning, neck-breaking, and anal and genital electrocution are common.  Many are skinned alive.
At Fur Farms Rabbits, foxes, mink, chinchillas, and other animals spend their entire short, miserable lives in tiny, filthy wire cages.
The anguish and frustration of life in a cage leads animals on fur farms to self-mutilate, biting at their skin, tails, and feet. Many animals frantically pace and circle endlessly, and some even cannibalize their cage mates. Parasites and disease are prevalent on fur farms due to the deplorable and overcrowded conditions.

‼️Leather is probably one of the most fashionable fabrics used in clothing. Leather jackets, coats, gloves, boots… Few people realise they are wearing the skins of animals who have been killed in the millions to feed such inhumane production.
▪here does leather come from? To start with, your leather almost certainly is sourced from China or India. They can be ripped from cattle or even unborn calves.
No way to be sure when buying mainstream leather. But even before this occurs, they need to be transported to the factories. The animals are often made to walk for days without rest, food and water. They are thrashed or injured to keep them walking despite the dehydration. Many of them perish even before reaching the factory.
Once the animals get there, they are kept in narrow enclosures, where they may be castrated without anaesthesia, dehorned or branded. They then face the inevitability of the slaughterhouses. They are hanged upside down, still alive, and they are made to bleed to death before their skin is carved out. It is then treated using extremely dangerous chemicals.
‼️Did you know that man’s best friend -Dogs and Cats are killed as well for their fur?
Each year, over two million dogs and cats are victims of the fur trade. The majority of them are killed intentionally in Asia for their fur, but some are also injured and killed in traps set for other animals. Dog and cat fur is often deliberately mislabelled as fur from other species and is exported to countries throughout the world to be sold to unsuspecting customers.
There are no penalties for abusing animals on fur farms in China, which is the world’s largest fur exporter. China supplies more than half of the finished fur garments imported for sale in the United States.
Other precious animals used for fur:  are eg. Beaver, chinchillas, foxes, mink, rabbits, raccoons, seals, bears, wolves ….
‼️Did you know that Fur trim is not a by-product. Many, perhaps more than half of all animals killed for their fur, are killed specifically for fur trim.
Sales of traditional full-length fur coats have declined. As a result, furriers have shifted toward an emphasis on fur trim to keep themselves in business. Fur-trimmed items are widely available, and in many cases, are not labelled as fur.

3. Then there is the Wool issue

Around the globe, the wool industry exploits, abuses, and kills sheep, treating them as nothing more than wool-producing machines. These intelligent, gentle individuals are shown little in the way of respect and compassion.
‼️The shearing process is usually a violent and terrifying experience for sheep. Shearers are paid by volume, not by the hour, which encourages fast, rough handling that leaves gaping wounds on the animals’ bodies.

Wool is another worldwide fabric used to make cosy, comfortable and warm garments which are specially used during winter seasons. However, contrary to popular beliefs, sheep do not need to be sheared. Sheep naturally produce the right amount of wool they need to protect themselves from weather conditions.

Furthermore, shearing usually needs to be done before spring, before they instinctively shed their winter coat. Therefore sheep farmers don’t want to risk shearing them too late , because that is equal to loss of wool and ultimately a decrease in profits , so most sheep are sheared when it’s still cold and an estimated 1 million sheep die from exposure.

Australia is famous to produce merino wool, but few known about mulesing. Sheep in Australia are specifically bred to have wrinkled skin which will increase wool production. This skin is prone to flystrike, a condition in which flies lay eggs in the skin and the maggots eat the sheep alive. To prevent this, farmers cut huge pieces of skin from the buttock area rather treating them medically appropriately, which would only decrease the profit margins.

‼️Also worth mentioning is that this is practiced without anaesthesia. And in the event their wool production declines, most sheep are sent to slaughter. They travel long distances, cramped and in crowded conditions, and most of them die from dehydration, injury and exhaustion.

4. Next is the Feather issue

‼️Birds such as geese suffer significantly while their feathers are pulled out, which is a painful procedure that is done while they are fully conscious. They are killed when this is no longer profitable.

Or They electrically stun them, and then cut their throats. Moments later, the feathers are torn from the birds’ still-warm bodies before they’re skinned and dismembered.

Feather are used in often in theatres or Carnivals, as well as in feather dusters, boas, and fashion accessories.

5. Then there is the Silk issue

Tens of millions of silk moths are boiled alive every year. This means that hundreds of silkworms are killed for just one silk scarf or tie.

‼️Believe it or not, silk moths are sentient as well. They have a neurological system and being boiled is a painful death
✅ If you want to find out more on the dirty secrets the fashion industry doesn’t want you to know then 👉 Get our SIGNATURE to become a happy, confident & informed customer.
❇️ We all can make a difference by living and shopping more consciously. 😃🌍
Fashion Lies